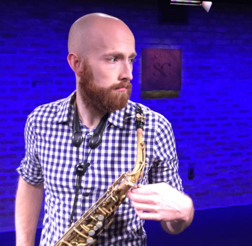 New York based saxophonist Jeff McGregor maintains an active schedule as a performer and educator. Since 2016, he has worked for Smalls Jazz Club writing their education blog featuring transcriptions of dozens of major artists.  His debut album Leap was released in 2017 and features jazz greats Billy Drummond and Alan Ferber.

Jeff McGregor Music was launched in 2017 with the publication of a companion book to Chris Potter's third ECM release The Dreamer is the Dream. This project was written in collaboration with Potter himself.

Originally from Canada, Jeff began his professional career at a young age working in his father's big band. While studying music at the University of Calgary, he began leading his own groups. During this period he studied with a number of Canadian jazz luminaries including PJ Perry, Jim Brenan, Gib Monks, Campbell Ryga, and Mike Murley.

In 2014, he relocated to New York City to begin graduate studies at New York University. During this time, he had the opportunity to study and play with Joe Lovano, Chris Potter, Billy Drummond, Alan Ferber, Ralph Lalama, Billy Drewes, and Brad Shepik, as well as to perform at venues throughout the city including the legendary Blue Note Jazz Club. While at NYU he taught as an adjunct instructor. He completed his degree in May, 2016.